From Caves to Condos: Tracing the million-year development of domesticity 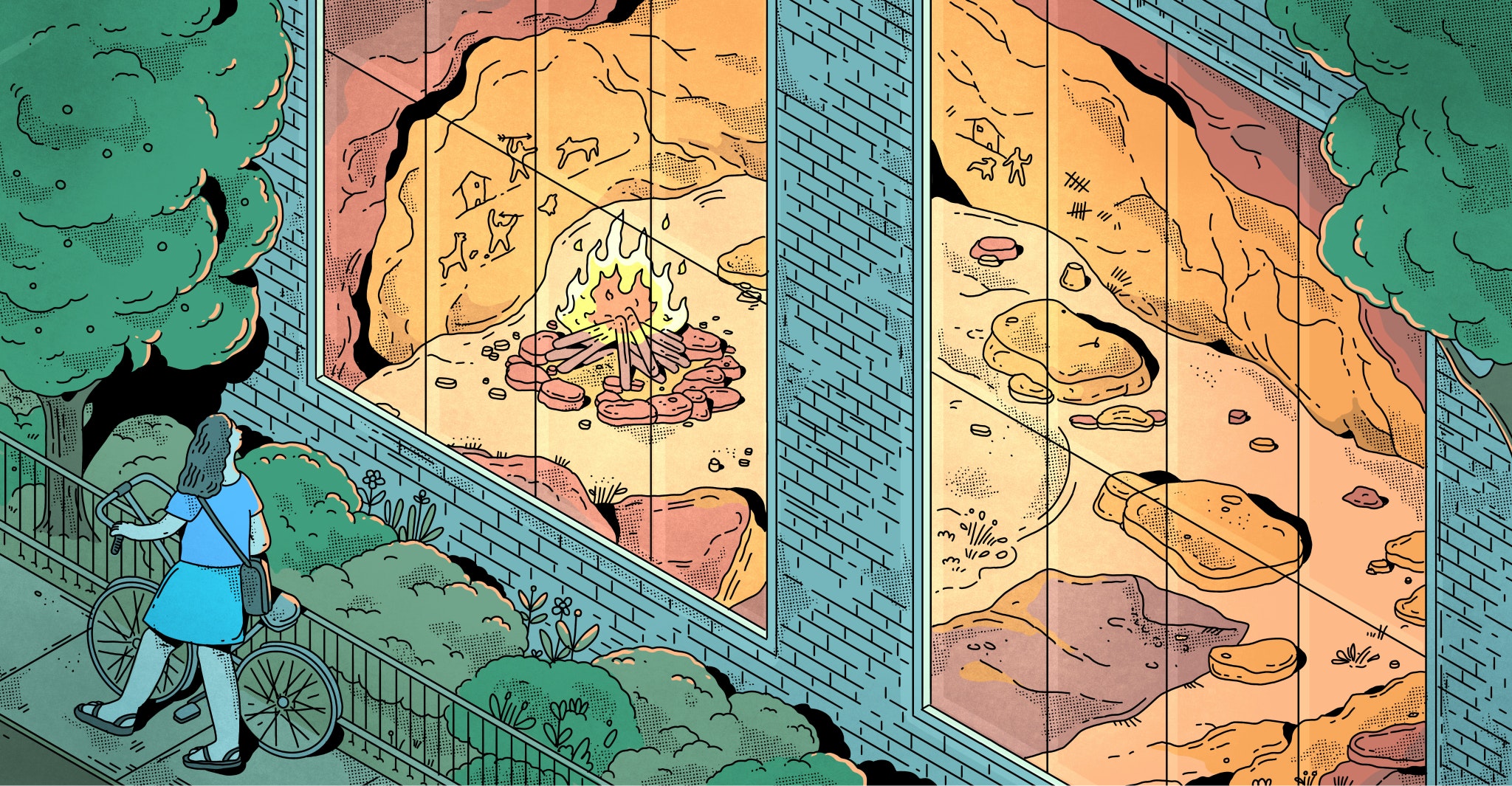 It wasn’t until I was preparing to buy my own house that I started really seeing houses. That might sound a bit silly—of course I’d paid attention if I passed a particularly beautiful or quirky house. But otherwise, they were just part of the urban landscape, things to walk past while I was on my way somewhere else. Before, I may have noticed the texture of certain neighbourhoods, by which I mean the predominant style and age of the buildings, but mostly I experienced houses as a sort of general blur that made up a city. When I began combing through real estate listings—casually at first, then more in earnest as the idea of buying seemed more and more feasible—I started to see houses differently. Part of it was the voyeurism of being able to see the plants, art, and furniture that people used to personalize their living spaces, even when from the exterior their house looked identical to the others in the surrounding development. I remember one listing that was pure 1970s grandma on the inside: wood panelling, floral-print couches, and doilies everywhere. I loved it, but sadly wasn’t ready to buy yet (plus I don’t think the decor was included).

I started noticing the outsides of houses, too. On my long daily walks (thanks, pandemic), I found myself picking out little bits of personality: some bright trim here, a fruit tree there, additions tacked on decades after construction (some better blended in than others). One of my favourite neighbourhoods to walk through was a grid of midcentury bungalows, originally built by the government for factory and service workers during World War II. I loved seeing how all these houses, which had all been identical when they were built some 80 years ago, had been changed by generations of owners. Some had custom-built porches, some had dormer windows, and all of them seemed to have vibrant gardens. With many of these houses, the differences are now more obvious than the similarities.

That ability to shape and adapt our dwellings is one of the things that sets humans apart from other animals. Many animals build shelters, of course, and some of those can be very complex—think about a beaver den or a wasp’s nest. But as social anthropologist Timothy Ingold points out in his book Building, Dwelling, Living: How Animals and People Make Themselves at Home in the World, “the beaver is no more the designer of the lodge than the mollusk the designer of the shell. ... Human beings, on the other hand, are the authors of their own designs, constructed through a self-conscious decision process—an intentional selection of ideas.” Humans don’t just build shelters, we build dwellings. We build homes.

But how—and when—did that transition from dwelling to domicile happen? According to Jerry D. Moore’s The Prehistory of Home, in order to trace the history of housing, we have to go back to a time before humans existed. About 1.4 to 0.7 million years ago, our hominid ancestors began building simple houses. These weren’t permanent structures, but instead occurred in the temporary encampments our hunter-gatherer ancestors created as they followed their food sources around. Even with these basic houses, early hominids were already demonstrating the adaptability that would allow them to range far and wide. We don’t know exactly what these structures looked like, but we know our ancestors built them based on what local resources were available, how long they planned to stay at that encampment, and the level of protection needed from the surrounding environment. Archeological digs reveal things like holes where the posts of the dwellings would have gone, charred areas where hearths would have been set up, and piles of detritus like animal bones: all evidence that our ancestors were spending months or even years in the same area. However, as Moore says, “little suggests that these encampments were imbued with deep meaning or emotional attachment.” They might have been building houses, but they weren’t really homes.

But why build these encampments at all? Why stay in the same spot for weeks or even months instead of constantly moving to find new food sources? One hypothesis argues that these houses, however temporary, came out of two biological imperatives: reproductive success and the high level of care needed by human and early hominid offspring. Moore writes that “it is to the reproductive advantage to have their offspring in a relatively safe location to which resources are transported.” So even if staying put meant more limited resources, it was beneficial to the babies and young children in the group, which in turn helped ensure the creation of future generations.

These encampments eventually evolved into more permanent settlements, with evidence of the oldest of these occurring between 18,000 and 8,000 years ago. There’s a popular belief that humans began to create these settlements when they became agrarian and began farming their own resources rather than hunting and gathering, but Moore writes that, in fact, sedentism—that is, the practice of living in one place for an extended period of time—predates agriculture. People living in the Late Neolithic period actually became less nomadic because of their developed more sophisticated techniques for collecting and processing food. These techniques required larger objects, both to process the food and store it, that weren’t exactly convenient to carry around from camp to camp—hearths to smoke meats, storage pits, and grinding stones (which could weigh dozens of pounds). Basically, our ancestors faced what feels like a very modern problem: They just had too much stuff. With these permanent or semi- permanent settlements came the development of more durable houses, like the pit house, a type of dwelling with a sunken floor and, usually, a slanted roof. Variations on the pit house existed all over the world, though, again, their materials and shape depended on local climate and resources. An archeological dig in central Ukraine found ancient pit dwellings that used mammoth bones to support the walls and roof. The evolution of these more permanent houses meant that dwellings could be passed down from one generation to another. This was one of several developments that began to create a sense of what Moore terms “deep meaning”—or emotional attachment for those dwellings by the people living there. The creation of more permanent settlements brought other meaningful connections: the burial of the dead in nearby cemeteries, instead of using isolated burial sites as their ancestors had. The living’s relationship with the dead changed as humans got used to the idea of having familial remains close by, creating what Moore refers to as a “connection between people and place.” Settlements became not only the space where people lived, but also the space that held the bones of their ancestors.

Our willingness to figure out new ways to live, new materials to use, and new ways of sheltering and surviving in all kinds of conditions are what has made us so successful as a species. But those dwellings, that technology that allowed us to migrate almost anywhere and everywhere on this planet, is also part of what led to our ability to stay in one place for longer. By fostering a growing connection between shelter and culture, humans created what we might recognize in a more modern sense as home. My daily life doesn’t have much in common with that of my ancestors from 800 years ago, let alone 8,000 years ago, whoever and wherever they were. But I feel a profound connection to them when I consider that we might have similar feelings about our homes—or, at least, not unsimilar feelings. When I bought my house, I was surprised at how emotional of an experience it ended up being. Until last year, I didn’t think I’d ever own a house, and I was sure I felt neutral about that: Sure, it would be nice if it happened, but renting an apartment was fine too. But after getting over the initial euphoria/terror that comes with signing the mortgage documents, I was overwhelmed by the reality that this was my house. I had a sense of security and safety that I’d never experienced before.

Maybe that’s not so dissimilar to the people living in those early encampments, as they honed the ways their dwellings could protect them from the outside world. I can also certainly identify with having too much stuff, the way it weighs you down—there were times during the moving process when I was tempted to set all of my stuff on fire and just start over in the new house with brand-new furniture, dishes, and linens. But it might be the connection with the dead that, in some ways, resonates with me the most. I don’t live near a cemetery where any of my family or friends are buried, but I do have objects in my home that keep them close to me: pieces of clothing they wore, jewelry they owned, even a Latin textbook that my great-grandfather used in high school. There’s something sacred about those objects, and having them in my house is what makes it feel like ... well, like a home. It’s fascinating to think of the house as a piece of technology, one that has been crucial to humanity’s survival, one that we continue to develop. But at their core, our houses aren’t so very different from the ones people lived in hundreds or even thousands of years ago. The dwellings those people lived in would likely still be recognizable to us as living spaces. And our need for safety, for connection, for a place to put our stuff hasn’t dwindled in the intervening years. Individual houses might go in and out of style, but we’ll always need homes.