How The Toronto Raptors Found Home, Even While They Were Away From It 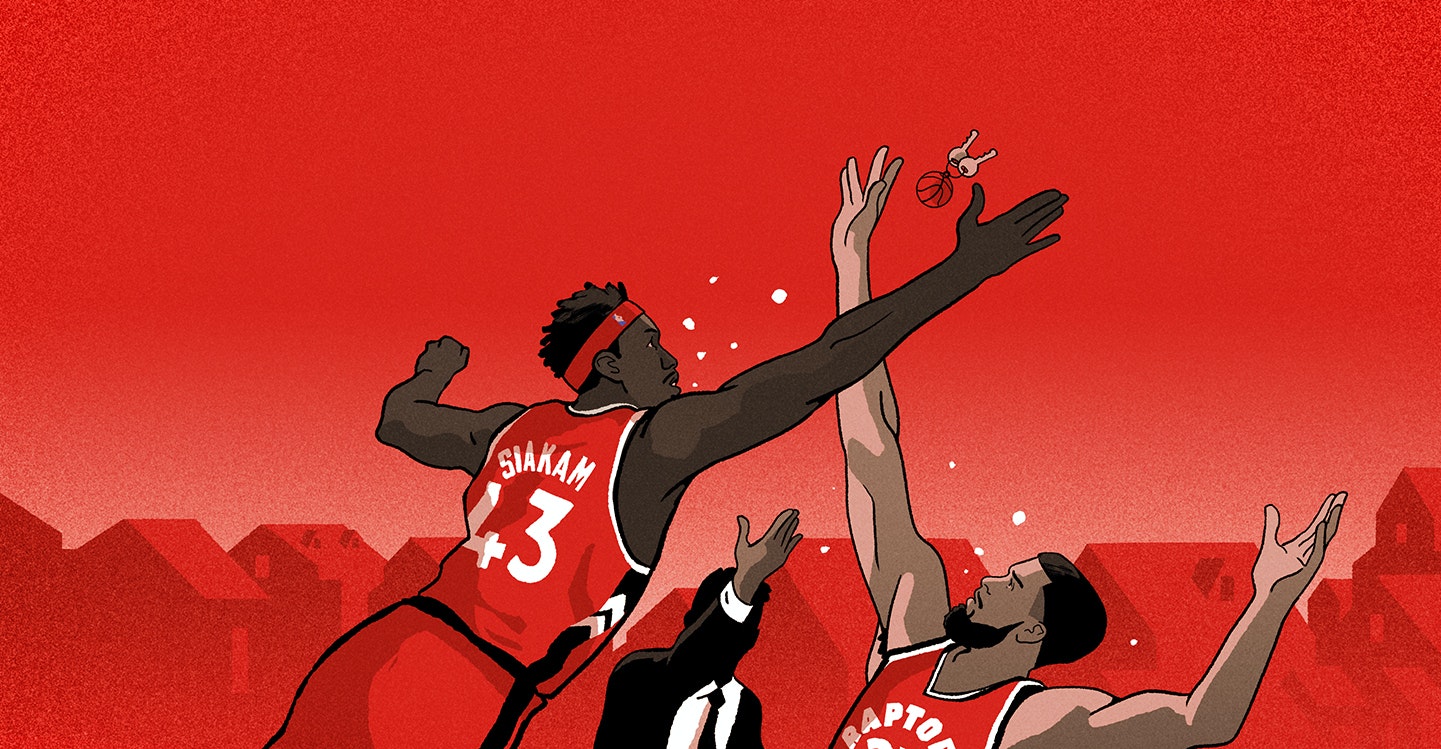 The concept of home went out the window in July 2020 for the Toronto Raptors. Along with 21 other NBA teams, they relocated to the Orlando “Bubble” in order to finish the 2019-20 season safely amid the COVID-19 pandemic. Home became hotel rooms; practice courts were set up in event ballrooms and a sequestered section of Walt Disney World’s sprawling grounds, rife with relative convenience in a pandemic but removed from close comforts of routine. Although the Raptors had entered the Bubble as title holders, it was the Los Angeles Lakers who left as NBA champions in October. The 2020-21 season was due to start mere weeks later, on December 22, and North America was still in the grips of the pandemic. Players agreed to commit but only if it meant returning to the arenas that housed their real home courts. The season was largely played in front of empty arenas; with no noise from the crowd, each thud of the ball and every player’s call was audible through every broadcast. The perceived advantage of a team playing at home — as stats from the season would eventually show — disappeared altogether.

While many players readjusted to what “home” meant during the pandemic, the Toronto Raptors felt the challenge uniquely. Many core members of the roster and Toronto’s front office didn’t return to Canada when the Orlando Bubble wrapped; with rigid Canadian border restrictions in place, many opted to travel to alternate temporary homes within the United States. And while the team was hopeful that they would see the 2020-21 season played back in Toronto (team president Masai Ujiri met with Prime Minister Justin Trudeau in the weeks before the NBA’s postponed season was set to get underway), the 14-day mandatory quarantine period for people entering Canada would prove too difficult for the league’s tight game schedule, and no exceptions were given, not even for former NBA champions. The Raptors found themselves without a place to play with less than three weeks before their first game.

When Saint Leo University basketball coach Lance Randall got a text from Toronto head coach Nick Nurse in December 2020, it wasn’t to reminisce on the games the two had coached against each other in the British Basketball League. Nurse only had one question for Randall — what was his gym like? The Raptors had quickly sent out feelers to facilities in central Florida capable of hosting an NBA team and its considerable support staff, and in turn sent out a survey to Toronto players with options like Fort Lauderdale and Tampa, among others, asking guys where they’d prefer to play.

After Randall fielded that initial call, Nurse and team staff flew down the very next day to tour Saint Leo, about 40 minutes outside of Tampa. “It picked up some legs pretty quickly,” Randall recalled, with the Raptors deciding that facilities and floor, a model similar to what the Miami Heat use in their practice space, would do the trick. Ujiri soon made the announcement fans were dreading: The Toronto Raptors would be the Tampa Raptors, at least for part of the season. Although the Raptors had hoped that border restrictions would loosen and there might be a way for the team to play out the second half of their season at home, the present reality meant that the players, their families, and some 60 employees would travel to Tampa with two and a half weeks’ notice to uproot their lives for an open-ended amount of time.

“We are all creatures of habit. Familiarity is where we thrive,” Teresa Resch, Toronto’s vice president of basketball operations said shortly after the team arrived in the sunny but unfamiliar city of Tampa. “And the more familiar you can make it, the more comfortable you are, the better you are able to perform and ultimately that’s what we’re trying to do here.”

Resch’s team quickly got to work. The court that would be installed at Amalie Arena, the space the Raptors now shared with the Tampa Bay Lightning, had been flown in from Toronto, as had the team’s 2018-19 championship banner to hang in the rafters. At the JW Marriott, the downtown Tampa hotel the entire team initially stayed at that connected to Amalie via walkway, two ballrooms were converted to practice courts with the help of BaAm, a Toronto-based large-scale event production company. BaAm, which has put on events like the Super Bowl and the NHL’s Heritage Classic games, was also enlisted to build office space for Toronto’s coaching staff, locker rooms, socially distanced meeting rooms for tape sessions, and training facilities. Annamarie Roe, the company’s president, recalled having to work with the Marriott’s contractors on certain floors where the new hotel was still under construction in order to remove lighting fixtures that would inevitably get in the way of basketballs being flung through the air.

The team was doing what it could to make a hotel feel as close an approximation to home as possible, but when it came to individual players actually finding homes in and around Tampa, there were some unforeseen snags. On Zoom scrums with media back in Toronto, Fred VanVleet, Pascal Siakam, and Norman Powell all mentioned arriving to house and condo showings organized by their Tampa realtors only to find other Raptors players leaving the same property. Real estate has always been a competitive field, but when the competition turns out to be your teammates, the concept of a work-life balance goes out the window.

For some players, the upended rhythm they started the season with was something they were able to take in stride, given that they hadn’t really had a regular routine since before the Bubble.

“I’m not rushing, it’s just peaceful,” new addition DeAndre Bembry joked about staying in the hotel long term. “You can walk over [to the arena], I can get used to that.”

But for others, like Powell, the months were beginning to blur together without a routine to tether himself to. “The toughest thing for me is trying to get settled and finding that routine,” Powell said. “Being in Toronto, having that set place, and knowing what it’s going to be like day in and day out, and what the team expects.”

For Siakam, it took him about two months to find a house in Florida, a stretch where he didn’t feel settled. “You want to be home, you want to be comfortable,” he said. “For me, I’m a homebody, I love being home. That’s the most important thing.”

Powell also chronicled how, after the Bubble, he’d returned to his new house in Las Vegas for a few weeks before heading to San Diego to visit his mom. He then headed to L.A. where he stayed in three different Airbnbs due to the company’s rules around stay duration and COVID-19 at the time. Powell returned briefly to Vegas to train before heading to join the Raptors in Tampa.

“Now it’s a little weird, [it’s] shifted,” he said, comparing the team’s setup in Tampa as something of a continued Bubble.

Powell had lived in the hotel for two weeks during training camp, “scrambling” to find a place while camp went on, before he eventually found a house and could “actually unpack and settle in.” It turned out to be a bittersweet reprieve; Powell was traded to the Portland Trail Blazers at the NBA’s trade deadline, barely a month and a half after he’d moved into his new Tampa home.

One of the Raptors’ most reliable and steady barometers is Fred VanVleet. Cool, calm, and considerate in his game on and off the floor, VanVleet made mention many times during the team’s Tampa season of the need to lean on resiliency — a long-standing marker of Toronto basketball — and chemistry, since DeMar DeRozan and Kyle Lowry effectively took the franchise over and turned it into what it is today. “It was a tough start, just being unsettled and moving somewhere new and trying to get comfortable,” recalls VanVleet, a father of two young children who was tasked with finding a home for his family to settle into a comfortable and safe routine. “[It] definitely was a challenge, from the very beginning.”

For NBA players, a large portion of their working season is spent on the road. But it’s time that’s buffered by team dinners, or getting together with friends to hang out in their cities. They might be away from home and their families, but they’re able to fill that time and space up with meaningful social breathers. During the 2020-21 season, the NBA implemented mandates that restricted players from leaving their hotels while on the road in order to try to limit potential exposure to COVID-19. Nick Nurse, mid-season, was candid about the effects that he and the team were feeling without those small and needed breaks between games and travel.

“I literally haven’t left the hotel on our road trips yet,” Nurse said. “It’s like, you go to a city and you stay in the hotel. It’s not like we’re going out and doing a heck of a lot of bonding.”

“I do worry about guys’ mental health as a brother and a teammate and a friend,” VanVleet said of the wearing effects the move, adjusting to a new city, and the season’s rigorous schedule was having on the team. “It’s not an easy situation. I don’t want to discard that. But at the same time, it’s a situation we’re in, and the season is not gonna stop. We can hang our hats on that. We’ve gotta find a way to get through it. It’s definitely different from being in Toronto, obviously, but here we are.” The team inevitably leaned on their support staff, all those additional people who travelled with them to try and make things as comfortable as possible from the start. As the season wore on, the Raptors experienced more loss than they were used to, both in games and through integral and familiar players on the team being traded. But new faces joined the roster and brought with them needed energy. There was a lightness as Toronto’s season came to a close, and even if it was earlier than they’d likely anticipated — it was the first time the Raptors failed to make the playoffs in seven years — it came with the understanding, and relief, that a challenging chapter was about to come to a close. When the Raptors settle into their routine this season, back home in Toronto, it will be one forged by a new sense of flexibility and strength, with the understanding that home, ultimately, becomes the people around you.

The scramble to find a temporary home

Teammates bidding against teammates for homes