Sharing a Space: What the development of High Park tells us about caring for a place as a community 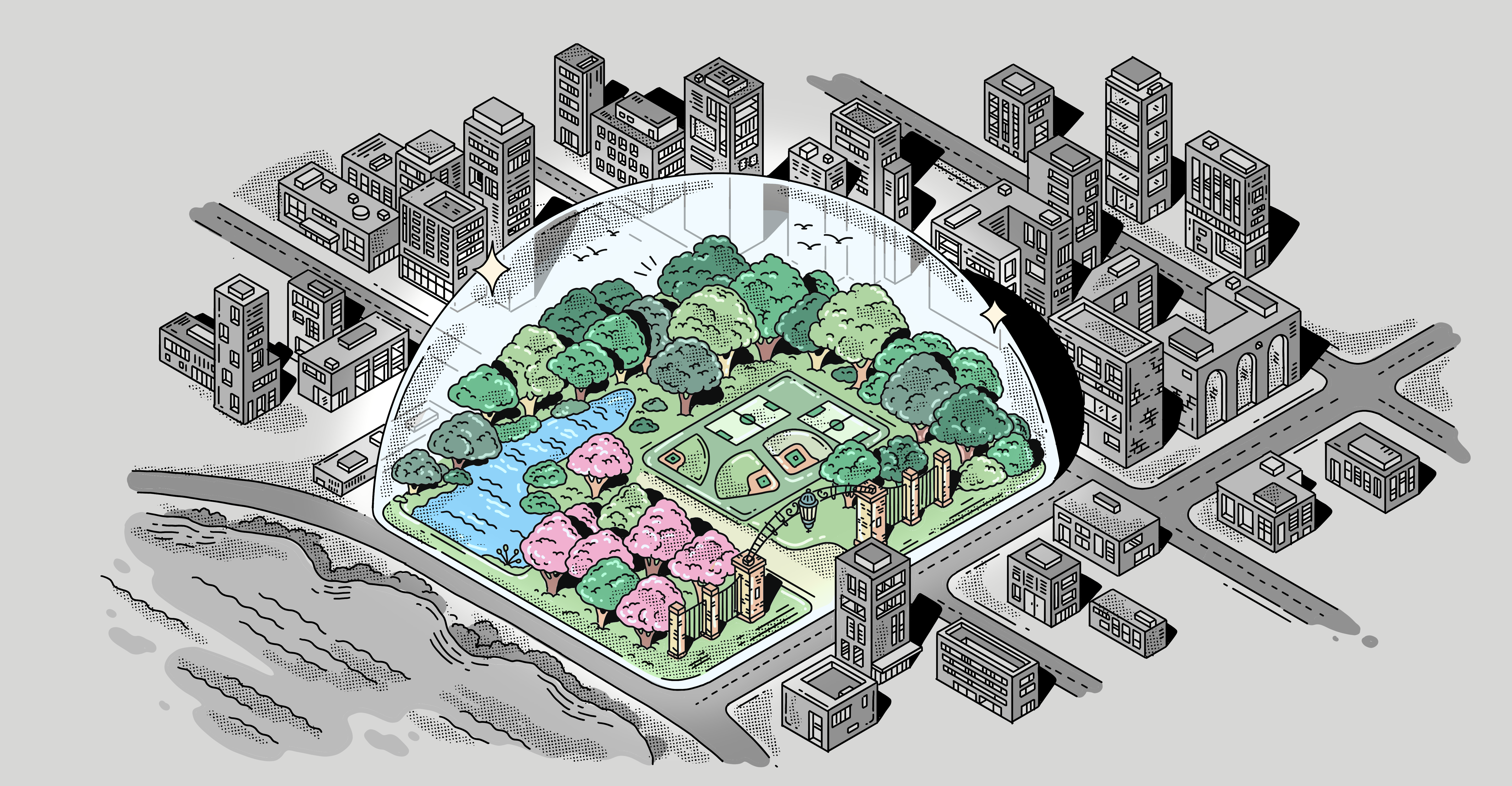 This past spring, at the height of wave three of the virus in Toronto, the cherry trees bloomed, releasing bright pink petals along the pathways and grasslands of High Park. Catching sight of the flowers at the entrance, I was stunned by their beauty, but even more stunned by the presence of police officers posted next to the trees, metal enclosures wrapped around the tree trunks. The cherry trees were being guarded, according to the Toronto Police, to prevent people from gathering too closely to admire the pink blooms during the pandemic and to protect the trees from vandalism after a man was caught climbing into a cherry tree on the High Park live stream because, he claimed, he wanted a nice spot to enjoy his beer.

Walking on a pathway dotted by police officers standing guard next to a cherry tree felt slightly dystopian, a strange collision of preserving nature and visible police presence in the park. The human element of a city park was becoming a danger to the natural space, and the city's response felt at once short sighted and overreaching. What would happen to the trees when the cherry tree blooms fell and the police officers moved on? During the pandemic, love for public parks in urban spaces has been amplified like never before and visitors to these natural spaces have increased. With many activities shut down or deemed unsafe, public parks became one of the only past times available to city dwellers, a respite from the claustrophobia and monotony of staying indoors.

Like many people working from home, I treasured daily walks through the park. High Park became essential to my mental and physical well-being, a breath of literal fresh air, a setting where I could forget about COVID-19 case counts or social media doom- scrolling and simply walk, observing the slow growth of trees or the cluster of birds gathered by the tall grass of the lake. Whenever people asked where I lived in the city, I always answered in proximity to the park, a swath of land so large it took me weeks of walking 10,000 steps a day to cover every trail and pathway I could find. After months of regular visits to the park, it was starting to feel like a second home, a shared space with strangers willing to venture outside and trace the same pathways as me.

Though High Park has more natural green space than amenities, people I talk to often associate it with the ice skating rink, the pool, the free zoo, or the Grenadier cafe. The off-leash dog park area is also often full, which increases traffic going through the park and fills up the parking lots along the main road. Free to access and open to all, public parks have become essential spaces during the pandemic, recalling a return to the simplicity and calm of nature in the face of continued anxiety and uncertainty. As the pandemic rages on, and public parks are becoming one of the only sources of amusement and activity in urban areas, there is a tension emerging between human access to these spaces and the preservation of natural areas. With increased use comes increased risk to plants and wildlife already under stress, complicating how our love for nature is affecting the well-being of green spaces like High Park.

Before High Park was a public park, it was, like all of the land that makes up modern- day Toronto, lived on by Indigenous peoples. The Iroquois, Wendat, and Anishabee nations accessed the Humber Valley and the Humber River to grow food, fish, and trade with European settlers. Lake Iroquois and the surrounding sand plains, formed as a result of the last Ice Age, were sacred spaces for Indigenous peoples, who maintained the soil for vegetation and plants using fire clearing. Remnants of thousands of years of Indigenous land stewardship are scattered throughout High Park today, including the black oak savannah, one of the largest remaining savannahs in Southern Ontario, now boarded by the traffic-heavy roads of Bloor Street West.

With the founding of the town of York in 1793, European settlers drained much of the wetlands and cleared several hundred acres to build city infrastructure. The remaining undeveloped land eventually became a private 165-acre estate owned by city surveyor and architect John Howard. He named it High Park; in a world before 40-story condos, it was the highest point in the area. Howard and his wife built Colborne Lodge and had a small farming operation on the land, but kept much of it natural and untouched. When the Howards gifted the land to the city in 1873, they stipulated the area be turned into a public park bearing the original name, that it remain in as natural of a state as possible, and be free for all to access in perpetuity.

Once the land became public, Torontonians visited the park in droves, and the demand for recreational use of the area increased. The city responded in kind, clearing trees for sports fields, toboggan runs, and roads, and replacing the native groundcovers with turf grass. The swimming pool, skating rinks, food concessions, washrooms, and Grenadier restaurant were added to the space in the 1960s, as were non-native trees and ornamental plants to beautify the area. High Park began to morph into a natural space that catered to human interests, a place for entertainment and recreation, complete with a trackless train that took visitors around the entire park on a convenient, family-friendly tour. In the coming years, the amenities in High Park are set to expand even further, with a $2.6 million investment in the High Park Zoo from the Government of Canada, as well as a $4.3 million grant to renovate the High Park Nature Centre.

On a recent tour with a guide from the High Park Nature Centre, which runs weekly tours centered on different themes (mine was time traveling through the history of the park), I got a deeper sense of the ongoing challenge of creating space for natural areas to thrive. A sunny Saturday afternoon, the park trails were full of people walking their dogs off leash, which can scare away wildlife like coyotes, grey squirrels, and red foxes, the guide noted. Surrounded by dogs, people, and busy traffic noise, it’s easy to forget about the thousand-year-old history of the area, or the plants and trees doing their work, functioning as more than just a beautiful backdrop. The guide also highlighted the challenge of invasive plant species in the park, first identified in a plant-species inventory study completed in the 1980s. Non-native plant species like dog-strangling vine and garlic mustard were introduced into the area when it was redeveloped and have colonized native plants, making it difficult for the ecosystem to thrive.

Multiple action groups are working together to mitigate the problems facing the natural environment of the park, including the High Park Stewards and the High Park Natural Environment Committee, volunteer groups working together to lobby city officials to put better protections in place for the natural conservation of the park. Another group, the Indigenous Land Stewardship Circle, is involved in the preservation of the black oak savannah, working in tandem with a City-mandated team to put land-based teachings in place and return the area to Indigenous leadership. In a recent letter to city councilors and MPs, the Indigenous Land Stewardship Circle presented an opposing view to how invasive plant species have typically been treated, arguing against the use of toxic pesticides. With Indigenous land practices in mind, the letter advocates for a shift from colonial land management to Indigenous land stewardship, centering the mutual exchange between humans and nature.

When I spoke to Lenka Holubec, a member of the High Park Natural Environmental Committee, who has volunteered in the park for years and visits the area every day to monitor the impact of human activity, she noted how people can love the park a little too much, unintentionally causing stress on the natural environment in ways that might seem invisible or easy to ignore. The issue of loving a green space to death is not limited to just High Park. With over 1,500 public parks in Toronto facing common issues like soil erosion, overdevelopment, pesticide use, and increased noise, the challenge becomes how natural space and city living can exist together in tandem. As green space becomes more of a priority for city dwellers during the pandemic, and likely long afterward, building a better relationship with the needs of nature is not only beneficial, but essential. If a park can act as a second home, we need to invest in it together to make it sustainable and natural, much like we would any living space. Given the natural state of things in green spaces like High Park, recovery and restoration of the land will in large part need to be put in place by us to ensure these public spaces continue to thrive.

5 sources listed in this article