Why the façade? The impact of façadism in a neighbourhood 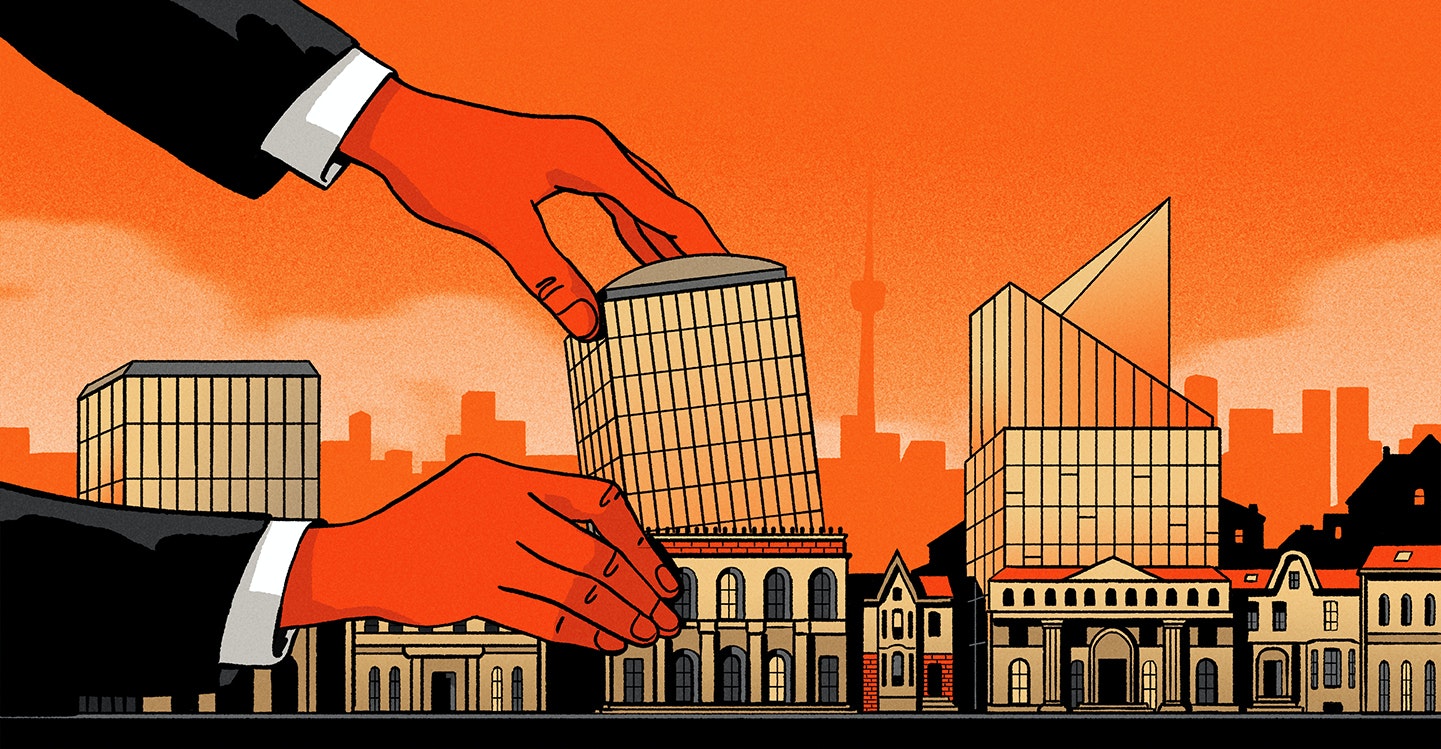 When I moved to Toronto in September 2020, driving a U-haul across the country with my partner during the pandemic, we were seeking access to green space and relatively affordable rent, ideally within the same area. My partner began the Google Maps combing of the city, moving west away from busy major streets, towards a large swath of green on the map. He soon found a condo building a few blocks north from High Park, an older but well maintained building in a yet-to-be gentrified area. The façade of the building was framed by six large stone pillars, the front door bordered by an ornate, neoclassical-style design and red brick. A short pathway, lined with flower beds and street lamps that harkened back to another time, extended from the entranceway. The Art Deco–inspired lobby was the opposite of your typical bland and cold contemporary condo space, with a geometric stone design on the floor and arches on several walls.

A few months after we moved in, I watched from the balcony as a new condo development near the subway station went up. "Italian finishings, imported," the woman on the phone said when I called to ask about the half-completed units in the building, gaping as she listed a rent price double what we paid now. The building I live in at first glance has a very different design and aesthetic compared to these new developments, at least at the façade level. It sits on the former site of The Third Church of Christ, Scientist, a Christian Science church, designed by Scottish architect Murray Brown in 1928, a tribute to the neoclassical Art Deco style of Paris, marrying geometric design with a religious space. In 2007, a developer purchased the building and filed for a designation notice to preserve parts of the original structure under the Ontario Heritage Act. "The surviving elements," the notice read, "will be incorporated at the base of the residential condominium on the site."

Among the surviving elements was a time capsule created by the church, discovered during construction, containing religious items. It was opened, new items were added, and it was embedded into the new building's foundation, to be opened again in 2028. Other religious relics of the church have also been kept, like the nameplate that reads THOU SHALT HAVE NO OTHER GODS BEFORE ME that I stare at as I run on the treadmill in the building's gym, but the most impressive element, worthy of curbside appeal, is the façade. As newer developments with their boxy shape and flat angles continue to go up, the façade of this building feels almost nostalgic in its version of modernity, a relic of a past design that somehow still remains. Though the façade gives the building a certain cachet on the street, distinct enough to be photographed or commented on by people walking by, it also feels like a fake outer skin for the development, a ground-level appearance that masks the generic multistorey units jutting out from above.

The historical preservation of the façade of older buildings, often churches, as part of new condo developments is an ongoing trend in Toronto and other Canadian cities, known as "façadism" in the architecture world. Bolstered by the city's definition of historical preservation, this approach saves older structures with significant architectural history from being demolished completely, but with disjointed results. The rising popularity of façadism, particularly in the high-density and overly expensive real estate of Toronto, isn't all that surprising. The approach allows developers access to the historical elements of a building, while also turning the space into money-making, multilevel residential buildings. The trend has become so ubiquitous that on Twitter recently, self-proclaimed "urban geographer" Daniel Rotszain posted a series of facetious renderings of possible condo developments "integrating" heritage façades like Honest Ed's and Sneaky Dee's, iconic commercial spots that have either folded or are under threat due to rising property taxes. Rostszain's renderings may have taken façadism to an absurdist end, but they’re not so ridiculous. The site where Honest Ed's stood for 68 years is currently being redeveloped into a 1,000-unit apartment rental and commercial space.

Some critics are applauding façadism for its ability to preserve older historical spaces in need of repair, lest they be demolished completely. "Façadism isn't a necessary evil, sometimes it's just the right choice," read one headline in the Globe and Mail, though ironically the same author later critiqued the building I currently live in as an example of façadism falling flat. Often framed as a "reimagining" of the space by developers, façadism can also lead to a form of "urban taxonomy" according to Toronto architect Robert Allsop, where the preserved façade becomes nonfunctional and instead contributes to the illusion of social and cultural vitality. Beyond their visually jolting appearance and questionable aesthetics, these buildings, like all structures, inevitably contribute in some way to the ecology of the neighbourhood. Built structures often act as social and economic centres, as gathering spaces and transient areas that people move around and through every day. With the urban taxonomy of façadism, Allsop notes, there is a confused interpretation of the architectural form. Entranceways no longer act as openings into the building, windows are no longer used to let in light, and the building's design becomes disjointed. Though these structures provide housing (at higher and higher rates) and a certain sense of history, they aren't built with the aesthetics, functionality, and overall preservation of the neighbourhood in mind.

With any design trend, there is also the risk of hegemony, where structures begin to look alike and are created with the same aesthetics. In a talk for the Architectural Conservatory Ontario (ACO) 2019 symposium, Toronto-based architect Catherine Nasmith compared main street developments to old-growth forests, evolving over long periods of time and reshaping in response to their surrounding environment. Nasmith described condo developments, with their similarly built structures and materials, as "invasive species" that threaten the survival of main streets. In this context, the historical façade simply acts as a disguise for condo development expansion, turning city centres into homogeneous spaces that are not sustainable long term.

Shifting neighbourhoods towards monoculture spaces is especially threatening for communities with diverse income levels, backgrounds, and histories. Toronto’s Chinatowns and Little Jamaica and Eglinton West, areas trying to maintain affordable housing for residents as developments encroach, have many historical sites that could end up as façade projects that, ironically, community members may not be able to afford to live in.

Still, condo developments and façadism don’t seem to be a fading trend, particularly in high-density cities like Toronto and Vancouver, where the costs of living are among some of the most expensive in the world. Ria Al-Ameen, an associate architect at Giamio, a Toronto-based firm that specializes in integrating design and heritage conservation, believes façadism can be done responsibly and sustainably, avoiding the threat of hegemony. Often, building with historical elements is a negotiation, where architects try to advocate for saving as much as possible, with mixed results. She points to a recent Giamio project, the Sunday School Lofts, as an example of façadism done with intention and care, viewing the historical elements as an integral part of the overall design for a low rise residential development.

Rather than view the façade as a "sticker" that is stamped on the new build, Al-Ameen's firm made the façade of the church a core element of the project, restoring the stained glass windows and finishings of the historical façade and reusing several elements of the old structure in the new design. The new residential space is also only four storeys high, 32 units total, so the scale of the new build feels more balanced in relation to the façade, bringing the symmetrical, rectangular shape of the original building into the new design. She also points out that though the façade was not required to be part of the new design initially, community members came forward to suggest preserving the heritage of the building in some way, and helped to direct the final design for the building. Given the many hands involved in developing a site, including architects, heritage architects, developers, and community members, Al-Ameen believes a good façadism project requires a slower, more patient approach, where developers devote time and energy to determining how the new build will affect the existing neighbourhood.

Living in a building where surviving historical elements are preserved, and built on top of, feels like only getting one half of the story, a sliver of the larger structure that once was. The typical condo building, like many that have been developed in the last decade, is ultimately not built to last and won't have the same life span older historical structures, when maintained, can have. Eventually, the condo development above the façade will be demolished once it serves its purpose, and the façade or surviving historical elements in some form will hopefully remain. I wonder then if it will be clear what the surviving spaces were once meant for, and how they will then be used in more functional, equitable ways in future iterations, or in future ecologies of space.

1 source listed in this article